Demand for web3 talent is high. Project directors from all over the world are looking for blockchain specialists and developers from other areas who can take their  initiatives off the ground. And it’s not always the experience that enables coders to find a lucrative job in web3 development. It’s more about knowing and understanding crucial principles of developing for web3. Check them all below!

Developing for web3 – blockchain and decentralization

When we think of web3, one of the first words that come to our mind is “decentralization.” The new iteration of the Internet is indeed intended to be decentralized - free from intermediaries and monopolistic tech giants.

However, what does this phrase really mean? What is decentralization? Does it refer to the development side of the web3? Or is it just a buzzword that people attach to every innovative progressive idea?

Web3 decentralization is rooted in blockchain technology and its unique principles. As a distributed, digital ledger of transactions, blockchain can be shared across a particular network, making all the data equally accessible to its participants. There are no intermediaries or authorities. Just purely decentralized, transparent information.

Most web3 projects use blockchain technology to achieve this level of “digital dispersity.” After the highly-centralized web2 era of the Internet, we are all looking for methods to avoid the lack of ownership over our data or exploiting it in a non-transparent way (as big tech giants – Facebook, Google, or Amazon – do on a daily basis). Therefore, knowing blockchain principles and the main technological aspects that lie in its foundation is crucial for web3 development.

How can web3 developers use their knowledge about blockchain technology? Decentralized apps (or dapps) serve as the best way to connect it with the needs and activities of end-users.

What are decentralized applications? dApps are built on decentralized blockchain architecture and consist of two main elements: smart contracts and user interface. The first defines the app's features and functionality, while the latter serves as a frontend that bridges the complex technology with actual users.

There are many types of dapps that you can develop. The list includes trending categories such as DeFi (decentralized finance), DAO (decentralized autonomous organizations), web3 wallets (explained below), as well as less popular but very promising solutions, e.g., decentralized DNS, SaaS-for-gas, GameFi guilds, or innovative data storing tools. They all make the web3 space more concrete and useful for non-technical people.

However, is there a need for decentralized applications when we still use “traditional” solutions on a daily basis? Besides the chance to join the web3 revolution, there are several reasons to build dApps instead of web2 solutions:


the network is community-owned, not company-centric;
tokenomics of the project enable to reward both the community and developers.

Developing for web3 – crypto and tokens

If blockchain is the core of web3 and dApps bridge the technology to users, using cryptocurrencies serves as the primary method of making interactions.

Crypto and tokens make the web3 more accessible to the end-users. It’s also a great way to reward web3 developers for their work on particular projects. While in web2 companies focused mostly on extracting value from people, in the next iteration of the internet, it’s handed over to the ones that contribute to various initiatives. Thanks to fees or specific tokenomic strategies (e.g., giving away some of the tokens to the developers), it is possible to “give back” to web3 devs as well as encourage them to contribute to the project continuously.

One might even say that web3 crypto and tokens more frequently serve as incentives than the products themselves. Of course, they store the value and (in the case of utility or governance tokens) enable crucial interactions (staking, voting, etc.). However, they are often used primarily for rewarding the community, attracting investors, and raising the financial capital of the web3 project.

Then, how to build your cryptocurrency or a token? The process very much depends on the character of the blockchain and the strategy behind it. However, it is easier than you may think. If you want to become a web3 developer, we encourage you to check a few guides on building tokens.

Same as with “traditional” currencies, users and developers need a place to store their assets. Some of them decide to leave crypto on the centralized exchanges, giving up the control over tokens to 3rd party. Well, after all these complaints about the centralization and security issues related to web2, you may already feel that it’s not a proper way of storing “digital pieces of gold.”

That is why developers came up with the idea of web3 wallets. What are web3 wallets? They work in a very similar way to traditional ones – the main difference is their digitalization and a higher level of safety. Apps like Metamask, Trust Wallet, or Rainbow are secured by public-key cryptography.

Web3 wallets serve as a more secure solution than storing crypto on a centralized exchange too. The wallet’s user becomes the one and only owner of tokens and doesn’t have to rely on the tool provider. Such solutions also contain buy crypto features directly in the dapp (using on-ramping – explained below), enabling full management of the assets. Moreover, as the wallet owner has full control over cryptocurrencies, web3 wallets has far greater usability and can be used for various activities besides trading – voting, staking, or governing the network.

It is crucial to mention that wallets are essential not only for storing and using crypto assets but for web3 development in general. They enable web3 developers to send and receive information from the network. Thanks to wallets, devs can interact with the network, make anonymous transactions, and build tokens (e.g., Metamask has such feature built-in to the app).

Developing for web3 – on-ramping and off-ramping

As we’ve covered all the essential elements of the web3 world, now it’s time to assess how to get into web3 at all. Well, the aforementioned on-ramping serves as a perfect answer.

What is crypto on-ramping? On-ramping tools became one of the main principles of web3 development. By including such a solution in the dapp, developers enable users to buy assets directly, significantly increasing the app's usability. It is also a great way to improve the overall user experience and reduce friction. It’s extremely important as many potential users still decide not to join web3 due to its complexity and the lack of trust.

The good news is that implementing on-ramping tools is easy and fast. Ramp Docs is a ready software development kit that every web3 developer can use and adjust for the purposes of the app. As a result, users will be able to experience all its features quickly and conveniently – by onramping into app using open banking, debit cards, or Apple Pay.

As a web3 developer, you also must bear in mind that users won’t only get into web3. They need to have a chance to “get out” of it, for example, to monetize and cash their crypto profits. Therefore, it’s crucial to implement such solutions as off-ramping via debit card or open banking. It’s also useful to explain to users how they can cash their crypto through centralized exchanges.

Each of the principles mentioned above may be perceived as a stand-alone, complex solution – very time-consuming in further implementation. However, while building web3 projects, you can also think about much simpler rules, tools, and fundamentals that you can include in your dApp:

Make your app understandable. Reduce the amount of technical jargon while explaining features and put emphasis on education in your marketing.
Do not overwhelm users. Propose as simple UX and design as possible – your goal will be to attract users, not only technical geeks. At the same time, you can create an additional blog/medium page where you explain all the features and benefits in more detail.
Show clear next steps. Present users what they can do after completing one phase (e.g., creating a web3 wallet). Explain to them what to do next and what are the benefits of doing so.

Be transparent. Never mislead users when it comes to transaction fees and security issues. The industry is still in its infancy phase and struggles very much with a lack of users’ trust. Therefore, such confusing and not clear activities will hinder the image of other web3 projects as well. 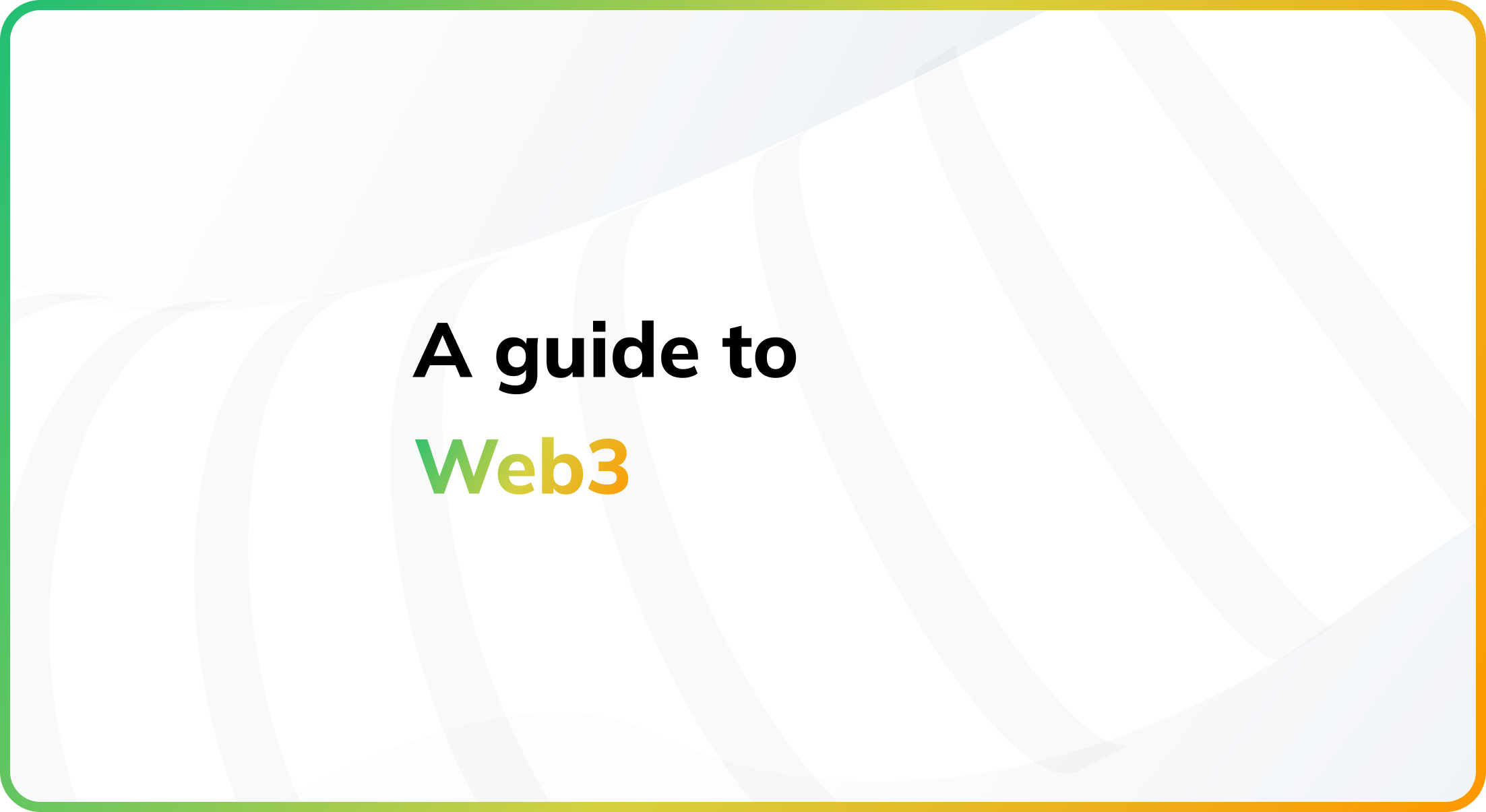 A developer's guide to Web3

For many people, it's still not clear what web3 is. But in reality, the list of existing and flourishing web3 projects is already extensive. If you're interested but not...